Nicolas Hulot left the government. I often talk to you about the collective energy of evolution in which we are. It consists of refocusing on us by detaching ourselves from our need to be part of a community, a group. The case of Nicolas Hulot is an example that will allow us to illustrate what I explain through lunation for several months. 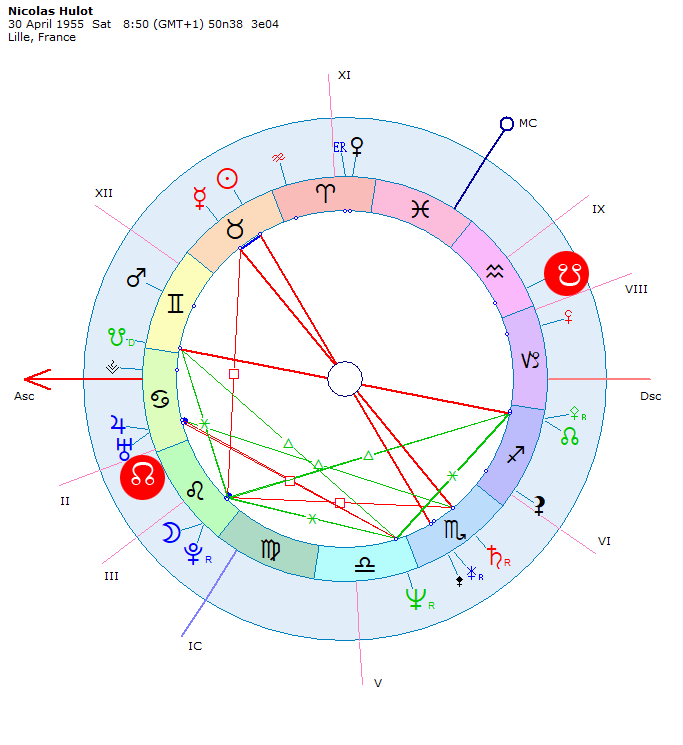 In lunation, I regularly mention my case to illustrate the dynamics of collective evolution in which we are. A news event offers us a case that everyone will be able to integrate.

In paragraph 4 of The Full Moon of August 26, 2018 (you can read a french version here : La pleine lune du 26 août 2018), I evoked that the energy of emancipation is at this moment in the sign of Taurus and that it was interesting to observe around us Taurus of the end. April. Nicolas Hulot is from April the 30th. So he’s pretty concerned about what’s going on right now. This energy of emancipation is approaching his native Sun and he is now resigning from the government. Beautiful emancipation of his vital energy.

The vital energy of Nicolas Hulot is strong in the field of experience of the public representation, of the public cause. This is where his energy carries him. Explanations His Sun is in house XI. She is also naturally turned in appreciation of the things of nature as he is Taurus of birth.

So we are in a configuration that explains very well that this man has worn, throughout his life, a taste for nature to the public through its TV shows, then his political commitment. Today, a force pushes him to emancipate himself from a form of straitjacket to “break structures that preserved a false peace inside.

Uranus approaches his Sun in house XI. That’s what he did. So for Nicolas Hulot, this energy of emancipation came to free him from his experience of the public and what he represents to the public. He needed to release something related to that.
Explications
Explications

Let’s continue now with the paragraph 5 The Full Moon of August 26, 2018. I mentioned the fact that the energy of emancipation mentioned above was in tension with our path of collective evolution Explanations: Uranus in Taurus is square to the lunar nodes. As a reminder, our collective evolution is to learn to refocus on us by ceasing to attach ourselves to communities and groups in an idealistic way. Explanations: North Node in Leo, South Node in Aquarius. This is exactly what Nicolas Hulot has just done. He refocused on himself and agreed to break away from a very strong community, the government. You will see later in the interview that it was a very difficult decision for him. There is a lot of sadness in his voice and we feel he is making great efforts to keep his dignity. I had also mentioned this point in the energy of the moment when Earth’s energies, linked to sadness, were dominant.

I invited you to observe in which house of your theme you could, too, live this evolution in tension with this energy of emancipation that breaks things frozen. At Nicolas Hulot, the refocusing is done on its values, whether moral or financial, and asks him to leave the values of others, the dependence on a form of community. Explanations: The North Node in Leo is in house II, the South Node in Aquarius is in house VIII. That’s what he talks about in his interview saying he does not want to lie anymore. He finds the pride of the Lion. He refocuses on himself and his values.

You see the precision of the gesture he has made today and how well he has responded to a force of evolution. Nothing required him. It was in his free will to do it or not. To resist it would have caused him much personal suffering, to accept it frees him. That’s it and free will, and evolution. Nobody forces us, it is often a test, but it frees us in the end.

We all have an application of this ongoing evolution that affects us somewhere and invites us to refocus on ourselves and free ourselves from an energy of community or ideals that does not work. Look at your theme. Learn it. It’s not that complicated and it’s a very nice tool. When I give personal examples in lunation, it’s not because I’m dying to tell you about my life – with my North Node in House XI, I would not want to be anonymous anymore – to show you that if you take the time to look a little, it helps us to understand our life with more serenity.

Now for those who want to go further in understanding how the life path works, you can look at another aspect at Nicolas Hulot’s. We have just seen how the energy of evolution of the moment was in phase with the act that he posed.

We can look at how this fits into its overall evolution. The path of life at the birth of Nicolas Hulot, the one who remains his great evolution throughout his life, evolves towards the determination of what he serves, to give an axis and a clear direction of his service and its usefulness in the world Explanations: Node North in Sagittarius in house VI South Node in Gemini in house XII. What he has just lived affects his path of global evolution. It is a link in his personal evolutionary chain.

When we evolve on our path of life with the energies of the moment as Nicolas Hulot has just done, there is a resonance with the deeper path that guides our existence.

Listen to his interview on France Inter. You will see that the big question that remains unanswered at the end of the interview is: “What was all this useful for? He hopes his gesture will be useful, but does not know, does not know what he will do. He is in front of another dimension of his evolution.

I hope for my part that this example will be useful to you!

Good emancipation to all!  Refocus on yourself.  Do not be afraid to leave ideals aside. Embody the creative power of your existence.